AFC Cup: ATK Mohun Bagan through to the knockout stage in maiden AFC Cup campaign despite 1-1 draw against Bashundhara Kings- In the 14th instance, an Indian team has made it to the knockout stages of the AFC Cup. ATK Mohun Bagan went down 1-0 at the 30-minute mark as Fernandes’ shot beat Amrinder Singh in the near post. It was a game full of fouls and one that saw 7 yellow cards and a red card. Bashundhara Kings’ Sushanto was sent off as he was being stretched off the field.

In the injury time of the 1st half, Sushanto Tripura was involved in a rash challenge and went down injured. The referee took his time and showed him a red card while he was being stretched off the field.

ATK Mohun Bagan missed a golden opportunity to go in front but the chance was missed by Liston Colaco as he failed to put the ball in an empty net after a pass by David Williams. He missed another chance at the 33rd-minute mark when he tried to dink the ball over the goalkeeper but in the end, it turned out to be easy save for him.

@6:22 PM: 90+4 min: ATK Mohun Bagan is back on defense. It was a nervous moment due to a mistake by Rahman but they retrieve the ball and clear it.

@6:17 PM: 89 min: Defended well. It was Roy Krishna who was back to defend and he clears the ball successfully.

@6:15 PM: 88 min: It is still not over, The Kings have received a free kick in dangerous territory.

@6:13 PM: 86 min: A great break for ATK Mohun Bagan. They had 3 players forward but the defense stops them.

@6:12 PM: 85 min: Lucky break for ATK. Robinho swirls a cross in and there is no one to clear it. The ball bounces and spins towards the goal but hits the post.

@6:11 PM: 84 min: Robinho shot from 40 yards. It was a shot on target and the ball was slightly fumbled by Amrinder but he makes the save 2nd time.

@6:07 PM: 79 min: ATK Mohun Bagan is still pressing high, they are not sitting back to defend. A draw or a win will get them through to the knockout stages.

@6:05 PM: 77 min: Manvir Singh goes down and Robinho is angry at the touchline as it stopped him from taking a quick throw-in

@5:59 PM: 72 min: Another great chance for David Williams! Roy Krishna’s pass saw him in front of the goal but it was on his weaker foot and he shoots it wide.

@5:57 PM: 70 min: ATK Mohun Bagan is now trying to frustrate its opponent by keeping the possession.

@5:53 PM: 65 min: Amrinder Singh requires a change of boots. As it stays, Mohun Bagan will progress in the AFC Cup

@5:47 PM: 59 min: Ashutosh Mehta swirls in a low cross which is defended by Khaled

@5:45 PM: 57 min: Still not working for ATK. They have tried different approaches to the game by pushing the ball wide and through the middle but the Kings’ defense stands strong.

@5:42 PM: 54 min: ATK is not rushing the ball and is playing through the wings. They have an advantage of an extra man but have not been able to create any dangerous chances.

@5:39 PM: 52 min: Great ball inside from Manvir Singh but Roy Krishna could not reach it. ATK needs to push more bodies in the box

@5:37 PM: 49 min: Deepak Tangri with a bad foul on Robinho and catches him in his face. He receives a yellow

@5:36 PM: 48 min: Appeals for a handball on McHugh but the referee ignores the call and ATK goes to attack

@5:16 PM: 45+2 min: This clash is really heating up. Both the benches are asking for fouls and cards. The game is getting aggressive as well.

@5:14 PM: 44 min: ATK is quick to fall back and defend but it will not help their cause. They need to win or draw to qualify.

@5:13 PM: 43 min: David Williams shot with his weaker foot from 30 yards out and hit the target. The goalkeeper answered with a save and it is a corner for ATK Mohun Bagan.

@5:10 PM” 40 min: Great chance for ATK! Roy Krishna did well to dribble past the 1st defender but his shot was blocked.

@5:09 PM: ATK Mohun Bagan is without Boumous. He created 5 chances in the campaign and they are missing his services in this game.

@5:07 PM: 38 PM: ATK has looked threatening twice in this game. Colaco missed a golden chance to go ahead and then missed another opportunity to register a shot on target.

@5:05 PM: 36 min: Manvir Singh and Kazi are having a great battle on the flank. So far, Kazi has matched Manvir’s pace and trickery.

@5:04 PM: 34 min: Sushanto is down and there is some concern regarding his injury.

@5:03 PM: 33 min: Another chance missed by Colaco. He controlled the ball really well after a long ball was played from the back, he tried to go for the dink thinking that the keeper would rush out. It turned out to be a very easy save.

@5:01 PM: 31 min: Manvir Singh on the right flank puts an exciting cross in but it is well defended by Shaifei

@4:57 PM: 27 min: It was ATK on the attack after the free-kick but it is saved by the Bashundhara goalkeeper Zico

@4:49 PM: 20 min: Another yellow card for a very rash challenge by Bishwanath on Roy Krishna. This is the 3rd yellow card in just 20 minutes.

@4:48 PM: 18 min: Great chance for ATK Mohun Bagan! David Williams takes on 3 defenders to pass the ball to Liston Colaco who had to put the ball in the empty net. He misses the net completely and it is a bad miss.

@4:46 PM: 16 min: Suddenly, all the pressure is on ATK and Bashundhara Kings are sending waves of attacks. ATK has managed to save all the attacks.

@4:44 PM: 14 min: Great chances for Bashundhara Kings to take the lead. A free kick taken from 50 yards out found Khaled’s header but the shot was blocked.

@4:42 PM: 12 min: ATK Mohun Bagan is trying a more direct approach by passing the ball long to Williams or Krishna upfront instead of trying to build a play.

@4:39 PM: 10 min: Bashundra now trying to enter ATK defense but the ATK back 4 is standing tall

@4:38 PM: 9 min: McHugh is down and Amrinder Singh pushes the ball out. He seems fine but it will break Bashundra’s momentum

@4:36 PM: 6 min: The first yellow card of the match is issued to Bashundra’s Becerra for a high boot.

@4:35 PM: 5 min: Sushanto takes a free-kick in ATK’s half and it is cleared by McHugh for a corner

@4:33 PM: 4 min: ATK Mohun Bagan win a free-kick in their own half, taken by McHugh looking for Krishna’s run

@4:20 PM: Just 10 minutes to go for the match to kick off. ATK Mohun Bagan can book its place in the knockout stages for the first time with a win or a draw.

The players of ATK Mohun Bagan had a well-deserved day off on Sunday with the Spanish coach rewarding the team for their wonderful performances. Speaking about the game, Antonio Lopez Habas said, “After coming back to the dressing room in the second half we changed strategy.  We brought some changes to the team.  That’s why the match came in our hands.  You will see that my boys have played two types of football in two halves if you notice. I am proud of the boys.” 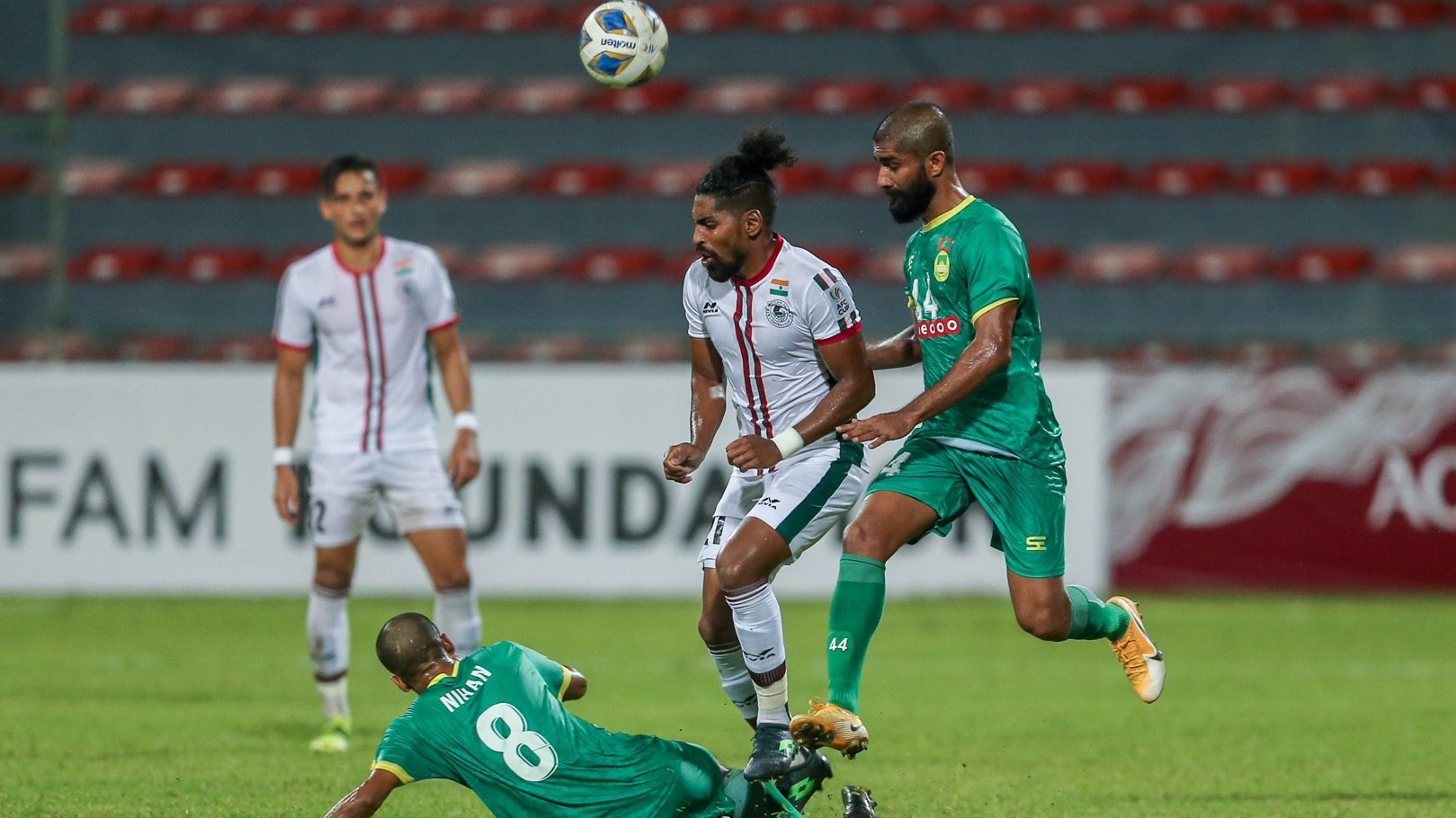 AFC Cup: ATK Mohun Bagan vs Bashundhara Kings: He will be hoping to see his team replicate their performances against their opponents in their last group stage match. The Green and Maroon will square off Bashundhara Kings in their next clash on 24th August.

While Mohun Bagan heads into the match after registering a massive win, their Bangladeshi counterparts played out a 0-0 draw against Bengaluru FC. They will also be eager to pocket a win and make a statement on Saturday.