Real Madrid vs Chelsea 1-1 Draw – Champions League Semi-Finals: Chelsea produced a composed performance to secure a fully deserved draw and a crucial away goal to put themselves in a promising position after their Champions League semi-final first leg against Real Madrid.

Real were on the ropes but danger man Karim Benzema, who had glanced the outside of an upright from long range, brought them back into the game with a brilliant equaliser, cushioning the ball with a header before sending an acrobatic volley beyond Edouard Mendy in the 29th minute.

Thomas Tuchel’s side were superior on the night and might even regard themselves as unfortunate not to take an advantage into the return at Stamford Bridge in eight days’ time as they set their sights on a final date against either Manchester City or Paris St-Germain in Istanbul on 29 May.

Real Madrid made 3 changes that drew against Real Betis last time out. Marcelo, Kroos, and Vinicius start the game while Isco, Rodrygo, and Asensio are dropped to the bench. Zidane also altered the side of his team to go with a back 3.

Real Madrid vs Chelsea: Thomas Tuchel did not make any changes to the side that beat West Ham last time out. Chelsea operated with a front 3 of Werner, Pulisic, and Mount. Rudiger, Thiago Silva, and Christensen started as the back 3 as Kante and Jorginho sat in front of the back 3.

ft. It’s all to play for at the Bridge next week! 👊#RMACHE pic.twitter.com/kXt1dMh8Ej

Chelsea started the game really well as Real’s defense looked lost out there. The Blues’ passed the ball really well, finding gaps between Zidane’s men. The first chance came in the 10th minute when Courtois produced a fine stop with his legs to stop Werner from 6 yards. Timo Werner should have done better.

Chelsea broke on the counter-attack down the left flank as Mason Mount supplied across directly to the right side. Christian Pulisic was there and directed his header across the face of goal for Werner to volley. He hit Courtois’ leg as the Blues had an early chance of getting the 1st goal in the match. 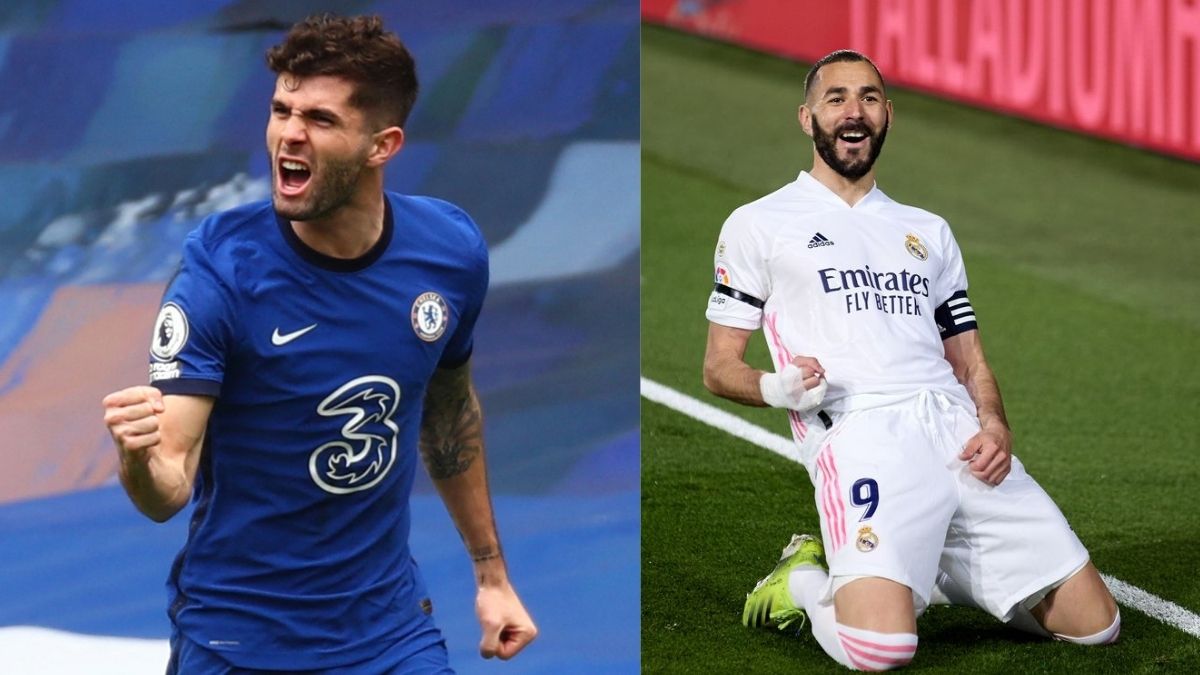 After a missed chance by Werner, it took the Blues just 4 minutes to grab an away goal. Antonio Rudiger floated a sublime ball over the top for Pulisic to chase. The American collected the ball in the left-side channel and was afforded space and time in the box.

Courtois came forward but Pulisic went around him to hammer a shot that deflected through Varane in the goal in the 14th minute.

Karim Benzema almost equalized in the 23rd minute but saw his left-footed shot from outside the box hit the post. Mendy was beaten.

The Spanish side equalized as Karim Benzema converted on a volley. Marcelo whipped in a dangerous cross across the back of the post for Casemiro to rise and head across the goal.

Militao helped the ball in the path of Benzema who reacted and volleyed past a powerful shot into the back of the net.

Thomas Tuchel and his team will be satisfied with their efforts, notching a crucial away goal that could be decisive in the 2nd leg next week.