Australia beat England by three wickets in the third ODI and win the series 2-1 and end England’s unbeaten run to the summer.

Here is the England vs Australia 3rd ODI Live Commentary

That’s it from here guys. Thank you for joining us.

1.42am
Australia wins by 3 wickets

Starc sweeps for four and Australia win by three wickets with two balls to spare! The Aussies the series 2-1 and end England’s long unbeaten run at home.

Huge moment! Last ball of the 49th over and Carey tries to get the ball down to third man but Mark Wood comes in and takes a brilliant catch! Game on. Australia need 10 from six balls. FOW-292/7

Maxwell tries to launch the ball over the legside, gets a leading edge and Tom Curran takes the catch at the second attempt at short third man. The end of a brilliant knock. Australia need 18 from 15 balls. FOW-285/6

That stand was worth 212. #EngvAus

1.25am
Century for Alex Carey!

His first in ODI cricket and Australia are cruising now. The partnership has now passed 200 and the required rate is little more than a run a ball. Australia need 21 from 18 balls; AUS-282/5 after 47 overs

This is now the highest 6th wicket partnership for Australia in ODIs – of all-time!
Surpasses Mike Hussey and Brad Haddin’s 165 against WI in 2006. 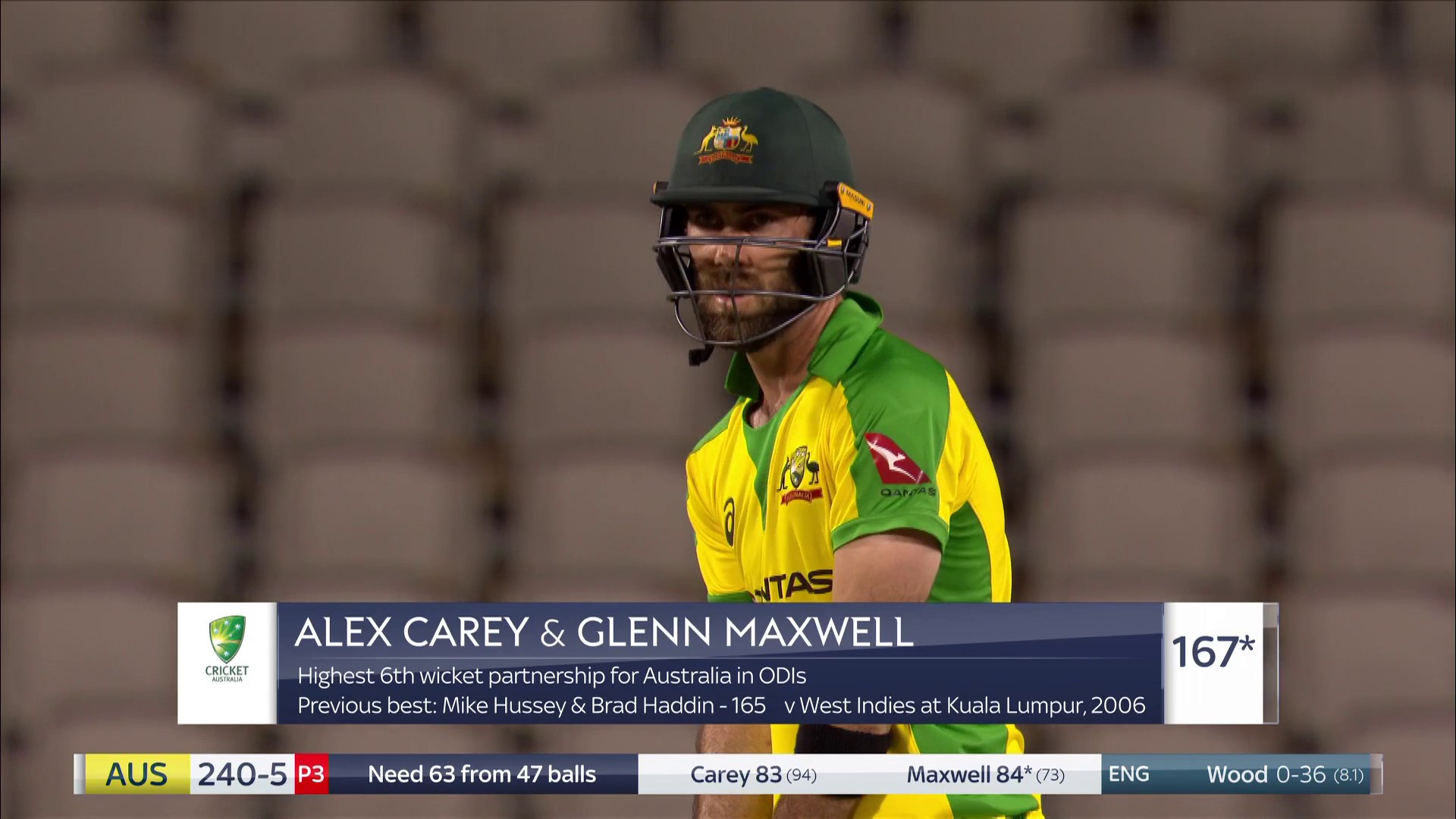 12.49am
Who will win the series decider?

12.42am
Highest 6th wicket partnership for Australia vs England

Glenn Maxwell averages 49.83 at Old Trafford. No ground at which he's played 10+ matches (all formats) does he average more. #EngvAus

12.27am
England in dire need of wickets!

Morgan keeps Woakes going into his eighth over. It is another really good one from the England seamer, a couple of slower balls to end it, Carey can’t get them away and so it is just three from it. AUS-186/5 after 35 overs

Six! Maxwell gets hold of Rashid’s delivery, hitting high over deep midwicket to get to Fifty from 48 balls.

12.15am
Maxwell rides his luck

Two big moments in the game, Maxwell survives on both occasions.

Fifty for Carey! He was given a second chance after that Archer no-ball and he is making it count. AUS-168/5 after 32 overs

Adil Rashid is slog-swept, and deposited over deep square leg for a half a dozen! Fun-fact: Adil Rashid averages 22.81 with the ball in the third match of a series which is his best average including one-off ODI matches. AUS 146/5 after 28 overs ; need 157 more from 22 overs

Root continues and sees his third ball launched downtown by Maxwell for a healthy six. That swells the return to eight from the over and we’re at halfway already! At the same stage ENG-130/4 after 25 overs

In their last 37.5 overs of cricket, Australia have lost 13 wickets for 158 runs. #EngvAus

11.19pm
Australia have a reprieve
Carey dismissed, but Archer bowls a no ball

Archer holes out this time! Soft, soft dismissal but there’s drama. That’s a big, big no-ball from Archer. Carey survives! He had chipped that straight to third man where Adil Rashid took an easy catch. AUS-95/5 after 20 overs; need 208 more runs to win from 30 overs

Australia in deep trouble as Billings swoops to shy at Buttler’s end – the ‘keeper takes the ball in front of the stumps before breaking the wicket with Labuschagne well out. FOW-73/5

10.48pm
What is happening in Manchester
Root strikes again!

Root has another as Marsh looks to work to leg but only succeeds in inside-edging onto his pad, the ball ballooning into Buttler’s gloves. Morgan chortles. FOW-55/4

Root comes into bowl and the gamble has paid of for England as Warner departs for 24. FOW-51/3

Just 12 runs have come in the last two overs with Marnus Labuschagne and David Warner in the middle. A relatively quiet spell for the visitors. AUS- 47/2 after 10 overs; need 260 runs more to win

Warner and Labuschagne nudge and nurdle singles away in Woakes’ fifth over, the bowler regularly taking pace off the ball to try and fox this batting pair the way he befuddled Stoinis. AUS-40/2 after 9 overs

Stoinis the victim this time. A rank delivery from Woakes generates a wicket as Stoinis chips to Morgan at midwicket. FOW-31/2

One lbw appeal from Woakes quickly dies by dint of the ball clearly sliding down leg but there is no doubt about the second – Finch plumb to a ball that moves in and pings him below the knee roll. FOW-21/1

9.53pm
Warner starts with a boundary!

Clipped off the hips withexceptional timing, towards the short leg-side boundary. AUS-4/0 after 1 over

9.47pm
Aaand we are back with the Australia chase!

Out come the batsmen. And it will be Chris Woakes with the first over.

Fifty for Chris Woakes, his fifth in ODIs – and it takes England past 300! Two boundaries in the over, the first a reverse ramp that just beats the short third man fielder and the next slashes over backward point. Australia need 303 to beat England in the third ODI and win the three-match series. ENG-302/7 after 50 overs

Woakes hits the last ball back down the ground, Hazlewood gets a fingertip to it and maybe takes a bit of the pace off it, allowing Maxwell to get round from long off to keep it to a single. ENG-277/7 after 48 overs

Sends down one of those unplayable yorkers he’s the best in the world at. Got revrse swing to moves it away from the bat and clatter into the base of off stump. FOW-266/7

Adam Zampa’s bowled out with 3/51 off his 10 overs while Cummins is done with 53/1 in his full quota. On comes Starc again and concedes just three runs of his over. ENG- 249/6 after 45 overs

Starc completes his 8th over.

Cummins' ball to dismiss Bairstow deviated 3.1° off the pitch, more than any other ball he's bowled in the series so far. #EngvAus

Brilliant from Pat Cummins to end Bairstow’s wonderful innings. It’s an off-cutter from the seamer and it really jags back, through the gate and into middle and off. FOW-220/6

A superb piece of bowling from Cummins claims the key wicket for Australia ?

Billings reverse sweeps, doesn’t get hold of it and the ball loops up off the top edge to Mitch Marsh at short third man. FOW-210/5

What a shot to get there as well, 90mph from Cummins and Bairstow just flips it off his hip and high over square for six! Four more! Nailed back down the ground, Bairstow is on the charge now as well! ENG-208/4 after 37 overs

Well that's certainly one way to bring up your ? ? #ENGvAUSpic.twitter.com/WMeMsPhtoa

FIFTY for Billings! Hard sweep next ball from Billings, that is middled and is into the gap for four more. Superb batting.

Sam Billings has reached 5️⃣0️⃣ for the second time in the series ?

Can he go on to register a second century as well?#ENGvAUS SCORECARD ▶️ https://t.co/qFgkr7ug0J pic.twitter.com/6Q7iPQueya

Brilliant from Billings! After an inside edge into the legside brings him two, he moves across his stumps and ramps Starc over fine leg for six!

7.57pm
A massive six from Billings!

Poor delivery from Starc. Billings rocked back and gave it a thump, and this time gets it perfectly right. Sails away past cow corner and into the car park.

Mitch Marsh is doing a good job to contain England in a role that Australia have struggled with in recent years. Since the 2015 World Cup, no ODI team has a worse economy rate with bowlers 5th and below in their bowling order. #EngvAus pic.twitter.com/aNjBClGY5l

The third fifty of England’s innings comes up at a run-a-ball and much quicker than the second (46-74-50 balls) as Hazlewood returns and sneaks one through Billings’ attempted pull. ENG- 151/4 after 29 overs

7.33pm
50 partnership comes up for Billings-Bairstow

Bairstow is in his element, sweeping fine for another couple which brings up the 50-run stand off 60 balls. ENG-148/4 after 28 overs

Bairstow has revived English hopes with his explosive batting display once again. He is currently batting at 81.  ENG-136/4 after 26 overs

Bairstow at his best ? #ENGvAUSpic.twitter.com/J2bIz7u49t

Much of England's success since the 2015 World Cup has been built around their ability to keep going with the bat even during the middle overs. No team in that time has a better run rate or boundary percentage during this phase of the innings. #EngvAus pic.twitter.com/2QRhoDc6Wd

100 comes up for England finally, but at the cost of 4 wickets. Billings with a boundary to get England to three figures. ENG-103/4 after 20 overs

Butler drives without conviction to Finch’s right at extra cover and the Aussie skipper dives to pouch two-handed. FOW-96/4

Bairstow completes his 14th ODI fifty, from 48 balls, and second of the series after his 84 in the opening game.

The runs have dried up for England, due to better bowling from Australia and the hosts easing up on the aggression front after the exit of Morgan. ENG-75/3 after 14 overs

6.23pm
Morgan throws away his wicket!
Zampa gets the breakthrough!

Morgan looks pretty unimpressed with himself, struck it well, but attempting that short with Starc stationed at mid-off was much too risky. FOW-67/3

Despite Eoin Morgan's struggles with the short ball, he has countered it well with the pull shot, scoring more runs than all but four players in world cricket since the start of last year. His current partner, Jonny Bairstow, is one of those four ahead of him. #EngvAus pic.twitter.com/jh2CTu74DK

Bairstow is in full swing! First, a boundary from the top-edge as he tries to to drag on the on-side and the next one from Starc is on the pads and the right-hander flicks it uppishly over mid-wicket. ENG- 25/2 after 5 overs

It has been slow going for England so far in the first 5 overs. ENG-25/2 after 5 overs

Another tight over from the Aussie speedster. Just 1 run off it, that too from a wide. ENG-9/2 after 3 overs

Root also goes for a golden duck, pinned lbw by an in-swinging ball from the Australia left-armer. FOW-0/2

Mitchell Starc strikes first ball! Roy shakes his head and admonishes himself as he trudges back to pavilion after slashing Starc into the safe hands of Maxwell at backward point. FOW-0/1

Here we go! Mitchell Starc with the ball, Jason Roy to take strike! 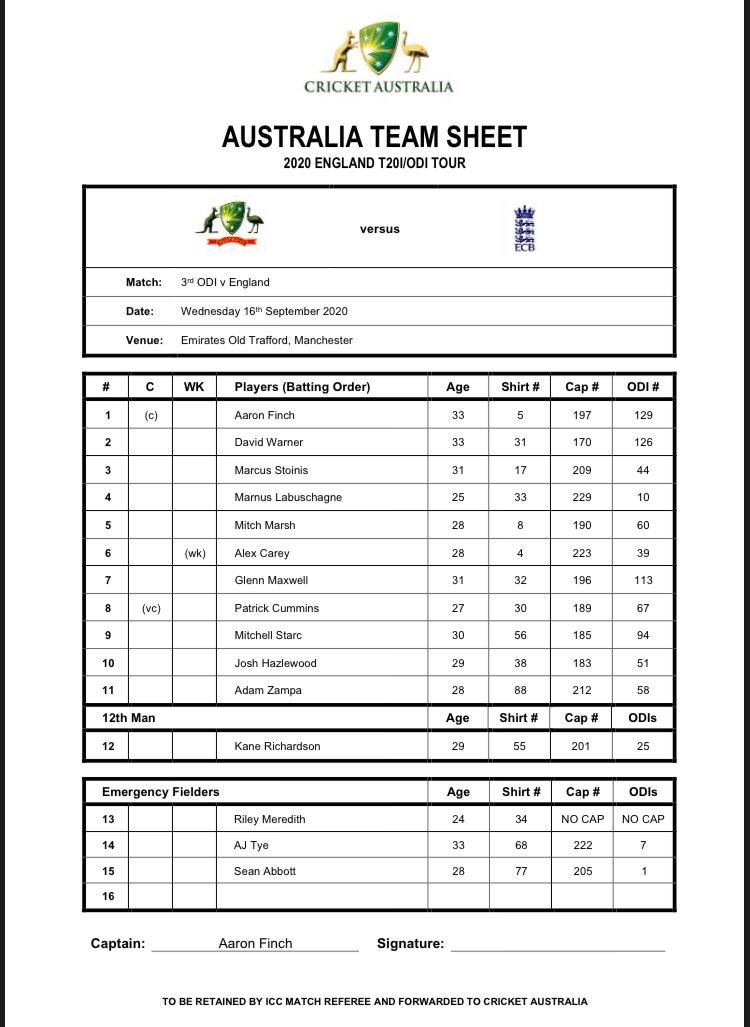 One change for the hosts – Mark Wood in for Sam Curran, with Morgan wanting some extra pace on a fresh pitch.

Eoin Morgan wins his third toss of the ODI series and has chosen to bat first ??????? #ENGvAUS pic.twitter.com/hgPPUlK0KC