That’s it from us here guys. See you again tomorrow with yet another mouthwatering clash between KKR vs MI

He smashes this one OUT OF THE GROUND and a bystander on thie road outside the stadium casually takes the ball away with him.

Archer sears in another bouncer, this time a quick one, and it’s too fast for du Plessis as he is hurried into his shot. The pull fails to connect as he gloves one to Samson behind the stumps

Tom Curran ends the 17th over well. CSK need 48 runs off 12 balls with Dhoni and du Plessis in the crease.

And the Proteas brings it up in style with a smash over the rope. He smashes Unadkat over the bowler’s head for another six to bring up his 50. CSK need 58 off 18 balls

Two Sixes in the over, just what the doctor ordered for CSK.Faf du Plessis finding his touch. 16 runs coming from thus over but the problem is, CSK need close to 18 runs an over. So even 16 becomes below par.

86 runs are needed off the last five overs!

That’s the end of Kedar Jadhav’s innings. It was a back of a length delivery from Curran, Jadhav went for big shot but got an outside edge and Samson flung his right hand up in the air to hold on to a fantastic catch. 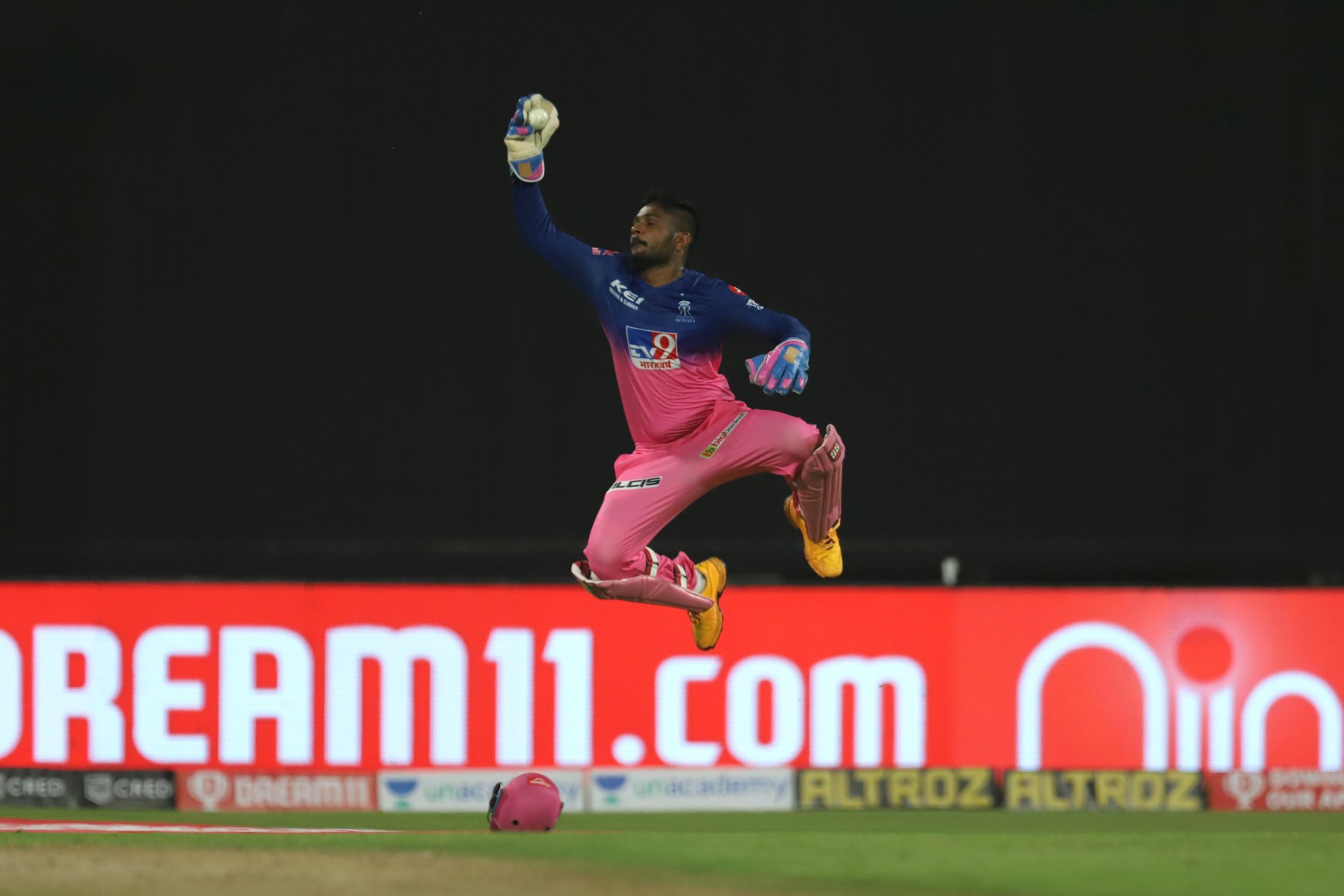 Only 7 runs off the Unadkat over when CSK’s required rate is over 15. No real intent from Jadhav and Du Plessis. CSK still need 109 runs off only 42 balls. Someone has to go really

Steve Smith has thrown the ball to his experienced bowler Jaydev Unadkat. That means, he might not keep for the death overs.

Room outside off and Jadhav does his business from the crease. He opens the face of the bat and hits one over point for four. The next ball is carved over covers for another four.

Kedar Jadhav is the new batsman! CSK are in trouble! Jadhav and du Plessis need to stitch a partnership and they need to maintain the run rate as well. CSK need 135 runs from 60 balls.

10.26pm
Wickets falling like a pack of cards for CSK

Gaikwad comes dancing down the wicket on the first ball he faces and misses it completely.More stumping practise for Samson as Tewatia gets his third wicket.

Sweet revenge by Rahul Tewatia. He was hit for consecutive sixes by Sam Curran but he comes back with very nice googly to get his man. Curran made the mistake of coming down the track and missing it altogether.

Vijay is the one who departs now as his miscued shot to the leg-side of the field is safely caught by Tom Curran. Shreyas Gopal takes the scalp. FOW- 58/2

17 runs from Tom Curran’s over. Shane Watson has made up for the sedate start. CSK have raced to 53 for no loss at the end of the powerplay.

10pm
Shane Watson ends the 5th over with a six

SIX! CSK needed that desperately. Shreyas Gopal was going through a brilliant over after conceding a boundary early on. But he drops one short and Watson takes full advantage of it by pulling it for a six.

Both the batsman look solid as they are currently dealing in singles and doubles. However, Watson once set can be the key man for CSK. CSK-8/0 after 2 overs.

Terrific comeback by Jofra Archer. After being hit for a six in the first ball, he goes back to his original tactic of hitting the hard lengths and doesn’t give anything away to Watson. Five dot balls in a row. CSK need a move on.

9.30pm
Aaand we are back with the CSK chase

Batting fireworks from Samson, a well made 67 from Steve Smith and a beauty of a cameo by Archer, propel @rajasthanroyals to a total of 216/7.

9.10pm
What a comeback by CSK this has been!

Curran gets Smith as the batsman fails to clear the mid-wicket fence and finds Jadhav in the deep.
Smith flicks it uppishly, trusting his bottom hand, but doesn’t get the power.
https://twitter.com/IPL/status/1308431197031161858
9.06pm
Curran called back after being given out

Tom Curran wanted to take a review but RR don’t have one. The umpires consult but decide to give Tom Curran out. The replays clearly show that the ball hit his thigh pad and probably it didn’t even carry to Dhoni. Now the umpires have asked Curran to wait.

The third umpire has been referred and he has adjudged it not out. So Tum Curran comes back into crease. We saw Dhoni having a long chat with the umpires there. We don’t know whether he actually called Curran back or the opposite.

Sam Curran picks two wickets in same over as Riyan Parag tries to run it past the keeper, but ends up giving a catch to MS Dhoni. The CSK skipper dives to his right and collects the ball. RR- 173/6 after 17 overs

8.54pm
Curran gets Tewatia and Parag

Sam Curran gets his man. A rash shot from Rahul Tewatia. He has gone for the review after some consultation with Smith and it’s not the most smart one.

Piyush Chawla needed that wicket; after getting battered, the experienced leggie gets the wicket of Robin Uthappa. Good captaincy by Dhoni too for backing him to bowl another over.

14 overs have been bowled, the umpires have signalled for the second stragetic time out. CSK looking to find inroads with RR still well on course to post a target in excess of 200.

Sam Curran palms it over the ropes and he would be very disappointed as it goes for a six.

8.35pm
Steve Smith gets to his fifty, Miller run out for duck

Steve Smith got to his fifty but when he tried to go for the second run David Miller was found short of his crease. Is this going to be a turning point? Two quick wickets for CSK now

Ngidi with the breakthrough

both Sanju Samson and Steve Smith are going after the CSK bowlers. The duo have added over 100 runs for the second wicket and CSK needs to break this partnership. Meanwhile, 19 runs come from Piyush Chawla’s second over as Rajasthan add 119/1 after 10 overs.

A solid 100-run partnership comes up between @IamSanjuSamson & @stevesmith49.

28 runs from Piyush Chawla’s over. The last one came from Steve Smith’s bat off a free hit. Let that sync in. What hitting by Samson and Smith

Sanju Samson on fire! He brings up a quickfire half-century off 19 deliveries 🔥🔥#Dream11IPL #RRvCSK pic.twitter.com/wrmwCUk5B4

Samson is looking absolutely on song; Smith playing anchor while the youngsyer takes on the attack. RR- 68/1 after 7 overs

That’s a fantastic shot from Sanju Samson. A shortish delivery from Chahar, no venom on it. Samson stands there, just transfer his weight onthe backfoot and uses those lovely wrists of his to flick it.

A very productive over for RR. 14 runs from it. Sanju Samson and Steve Smith have just started to step the foot on the accelerator. END of 5 overs

9 runs from the Lungi Ngidi first over – the best one of the RR innings so far. It has been a tidy start by CSK seamers.

Lungi Ngidi has been greeted with a fantastic pick-up shot from Steve Smith. Some timing there from RR captain. A loosener from Ngidi, on the pads and it’s no entry zone to Smith. He flicks it using his wrists and the ball flies over the ropes.

Deepak Chahar strikes and it is the debutant who has to make a long walk back to the pavilion. It was a short delivery and Jaiswal went for the pull, but gets a thick edge and the ball flies in the air. Both Dhoni and Chahar make a run to grab it but at the end it is Chahar who grabs the ball. RR lose their first man. RR: 11/1 (2.2 overs)

Top stuff from Sam Curran. There wasn’t much swing on offer but concedes only 3 runs from the over.

A rather eventless first over from Deepak Chahar comes to an end. Both the RR openers are off the mark. RR-4/0 after 1 over

Here we go! Deepak Chahar to opne the bowling for SRH while the young Yashasvi Jaiswal takes the strike.

A look at the Playing XI for #RRvCSK

The RR skipper is ready for the battle! Few minutes away from the toss!

The @rajasthanroyals Skipper @stevesmith49 in all readiness ahead of their first game in #Dream11IPL.#RRvCSK pic.twitter.com/t41vDYxymZ

THee RR camp is definitely missing the support of their ‘Halla bol’ fans. The franchise posted a haertwarming video for them. Have a look

RR’s Yashashvi Jaiswal and David Miller engage in some pre-match discussion? What could they be discussing about? See a glimpse

We all know how talented @rajasthanroyals's Yashasvi Jaiswal is and here he is ready for the big stage as he chats with @DavidMillerSA12 ahead of the game against @ChennaiIPL .#Dream11IPL #RRvCSK pic.twitter.com/xaRVUYYdSW

Exactly one hour to go for the toss!

CSK speedster Deepak Chahar gets ready to turn on the heat for RR batsmen tonight! Who will win tonight? 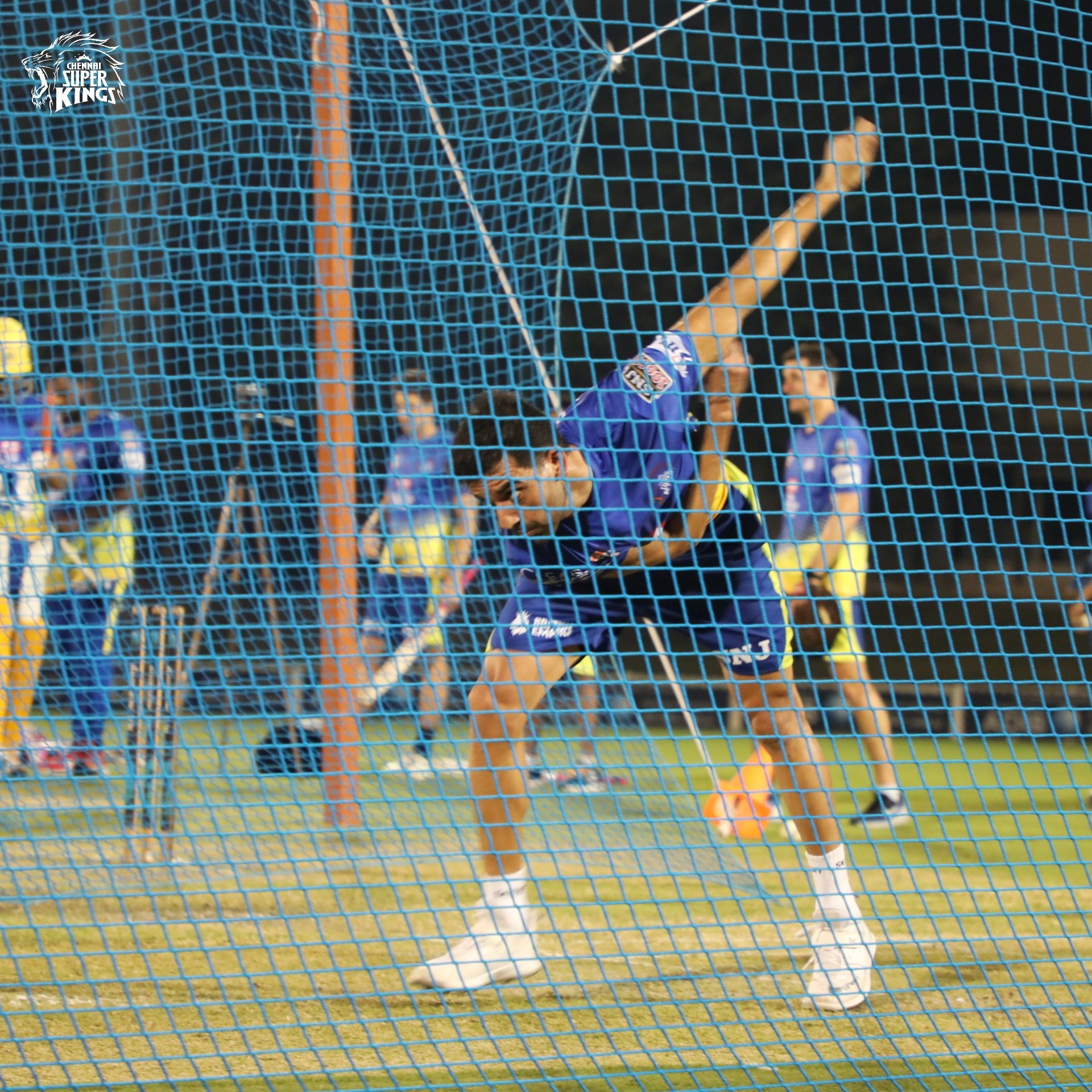 5.05pm
Hear what Trent Boult has to say regarding the UAE pitch

#WATCH: Mumbai Indians pacer Trent Boult says that the humidity in #UAE is helping bowlers to swing the ball during #IPL2020.
Boult said, "I would love to see swinging friendly conditions with a bit of pace in the wicket. Teams are adjusting quicker to these conditions." pic.twitter.com/7vGgut4LqL

The Aussie looks ready to get some fireworks going for tonight’s game against CSK. Check out

That balance. That footwork. That timing. 😍

Good news for the RR camp as skipper Steve Smith will be a part the first game of the season against Chennai Super Kings after recovering from a concussion. (Read more)

Hello peeps! Welcome back to the live coverage of IPL 2020. In today’s match we have inaugural IPL 2winners Rajasthan Royals take on Chennai Super Kings.