The Clippers do it without Kawhi Leonard. They now take a 3-2 lead before heading back home at the staples center.

Paul George continued his majestic run of form. He had 37 points, 16 rebounds, and 5 assists. It did not look like the Clippers were without their star man.

The Clippers’ bench scored just 13 points. Marcus Morris, Reggie Jackson, and Nic Batum stepped up to score a combined 57 points in the win against the Jazz.

3rd quarter made the difference for the Clippers as they outscored the Jazz by 14 points. They now lead the series 3-2.

Smart move by Utah. They leave Rudy Gobert in until the Clippers take George out. It seems likely that the two will never be on the floor without the other for the rest of the game.

Paul George uses that off-arm to push constantly. It’s amazing that he doesn’t get called for that offensive foul all of the time. O’Neale redeems his in-and-out 3 with that one.

Morris in transition and the Clipper lead is back up to eight.

That’s two big missed free throws in back-to-back trips to the line for the Jazz. The Clippers are for real here. The Jazz can’t afford to lose on the margins, but they’re turning the ball over and missing the gimmes.

Shot-clock violation thanks to some GREAT Jazz defense. Mann needed to try that floater after getting past Gobert.

Rudy Gobert is making such a huge impact on the glass. He didn’t pull in that rebound but just drew the foul.

This is the result of the Clippers playing so small. Yes, it supercharges their offense and lets them switch more on defense, but it makes rebounding a real challenge.

Rudy Gobert tips it in to cut the lead to five, but the Jazz have a very interesting decision on their hands. This is normally where Rudy Gobert would take his rest, but can they afford to be without him in such a tight game?

George right in Bogdanovic’s face! That’s an eight-point lead as he has 30!

So that’s a technical foul on Jordan Clarkson for the elbow to Nic Batum. The lead is up to seven.

Crafty finish crashing to the cup.

Morris for 3! The Clippers have never cooled off but the Jazz have, and the result is a six-point lead on a 14-3 run for the Clippers.

The Clippers are up by three and that’s their biggest lead since the first quarter.

It starts on the defensive end.

📊 The only team this postseason with 10+ steals in a half. pic.twitter.com/ZRVSYHsanL

Mann hits the mid-range jumper after the free throws and this is a one-point game.

That’s a HUGE call for the Clippers. It’s a flagrant one on Royce O’Neale. Two free throws and the ball for Paul George. They could tie the game here and now.

One of the benefits of making all of your 3’s? It opens up driving lanes. Royce O’Neale isn’t exactly known as a ball-handler, but he glided to the rim there with the Clippers expecting him to shoot.

Big drive by Terrance Mann there. Not only is he going to the line to try to cut the deficit to 3, but it’s Rudy Gobert’s second foul.

It’s a bit late to get him into foul trouble, but attacking him is their only chance at doing so. The Clippers have dominated the Derrick Favors minutes in this series.

Man on a mission. pic.twitter.com/axF0UdWeXK

Morris just stepped over Gobert. His coach isn’t gonna like that. Allen Iverson famously stepped over Ty Lue in the 2001 Finals.

A technical foul on Rudy Gobert. He and Marcus Morris just got into it.

That’s 12 for Marcus Morris, whose hot shooting helped secure the Game 4 win. His brother Markieff is not in the stands for this one as he was for Game 4.

That’s 15 first-half points for Paul George, who, by the way, would be the story of this game if anyone planned to miss a shot at any point ever.

the threes, they're falling pic.twitter.com/kkOguITXxh

Even when Bojan misses, the Clippers are so small that Rudy Gobert is uncontested at the basket for the tip in.

Jordan Clarkson has made five 3-pointers… and he doesn’t even lead his team. Bojan Bogdanovic has SEVEN!

Usually, it makes sense for the big underdog to take a bunch of 3’s. It introduces more variance into the game. Yet the Jazz have now attempted twice as many 3’s as the Clippers (20 to 10), but the Clippers are making so many shots themselves that it’s still a close game.

If the Jazz weren’t making every single shot they took, we’d be very impressed with how the Clippers are looking offensively. To have 41 points thus far is a remarkable achievement against a defense this good.

Paul George goes to the bench and the Clippers already give up a 6-0 run. He might not be able to sit tonight if the Clippers are going to have any shot at this thing whatsoever.

It’s 34-34. Neither team is missing any shots whatsoever.

We saw this even when Kawhi Leonard was healthy, but it’s exacerbated now that he isn’t. Clippers are constantly driving to the basket, seeing Rudy Gobert, and then hightailing it out of the paint. They are terrified of attacking him at the basket, and justifiably so.

Six 3’s for Bogdanovic. He hasn’t missed yet.

Bogdanovic hits his 5th 3 of the quarter

That’s the fourth 3 of the night for the Clippers. They may not have their typical starpower, but they’re hitting shots. Of course, so are the Jazz.

PG from way out there. 👌🏾 pic.twitter.com/TIWgxQFYXA

And there it is, the Jazz has retaken the lead. That was the first two-point attempt of the night for the Jazz, who are now up 15-13.

Royce with the strip 🧤
Bogey with the bucket ✔️#TakeNote pic.twitter.com/5WZrlVUDv9

The Jazz needed a few minutes to settle back in here, but they’ve done so. Bojan Bogdanovic cuts the deficit to three with a 3-pointer, Terrance Mann misses, and then Royce O’Neale ties it up with a quick 3 of his own. It’s 10-10 and this building is rocking. Timeout Clippers.

The Clippers might have some fight left after all. Despite Kawhi Leonard’s absence, they’re up 10-3 on the Jazz thus far. 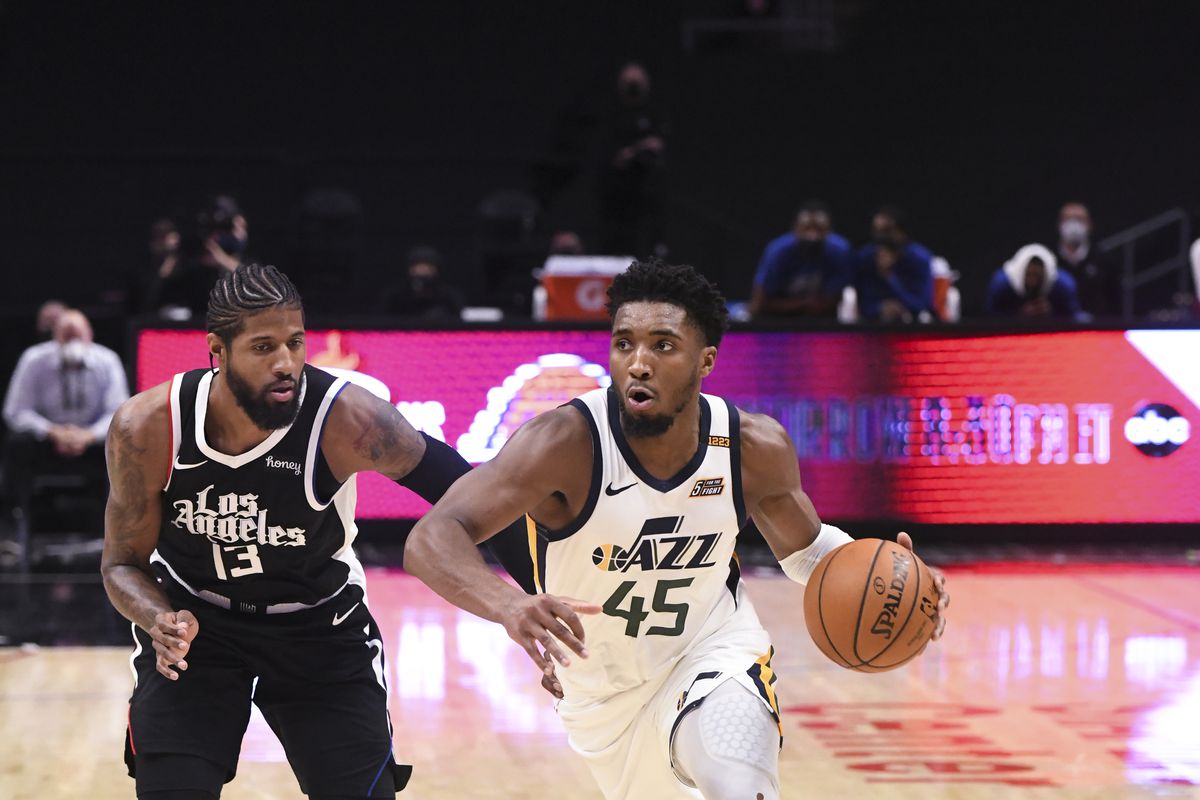