D-Rose for the tie! pic.twitter.com/jYFcrJtgAU

Randle bricks a three horribly but knicks grab the offensive board and Rose hits a floater to tie it. 105-105 with 9.8 seconds left. Hawks ball

Bogdanovic for three! tie game under a minute

Randle and Barrett have a combined 23 points on 10 of 33 and the knicks are still winning. if they can steal this game without their best players scoring, that will be huge for them

AB stands for "A Bucket" pic.twitter.com/9uaycuF68n

Bogdanovic with a three from the corner and you Williams sneaks inside for a layup.

The Hawks have had an answer each time it looks like the Knicks are about to create a little separation. we go to timeout at 82-81 knicks

A big time move from derrick rose. he’s been really good today with 15 points off the bench

Lou Williams with some HUGE buckets there for the hawks to end that knicks run. end of the third quarter the knicks are up 73-71. setting up for a fun fourth quarter.

Taj Gibson plus the foul. knicks up seven and the garden is rocking. The rest of this third quarter is gonna be huge for the hawks. can’t let this spiral out of control. first big test for them

Randle has been a little passive lately. Twice in the last few possessions where he tried to make an unselfish pass when he probably should have just shot it.

One thing to watch here for the second half will be how much resistance the knicks’ guards can create against Trae Young on the perimeter when the hawks go pick and roll.

Obviously easier said than done against someone as good as young, but there’s been a bunch of times where he’s just waltzed into the lane and at that point, it’s too easy for him

Two big stops there for the hawks. The crowd was going crazy and the knicks had two chances to take the lead. turned it over both times. hawks up 45-44 as we head to the timeout

Red Velvet to the rack!!! pic.twitter.com/SeTQq5Uvlm

This is what they do. 😤 pic.twitter.com/kfYVZH4AGR

Keeping it the same.

The first five for Game 1: pic.twitter.com/UK51hpVnki

Nate McMillan said De’Andre Hunter will play tonight, but he did not disclose whether or not he’ll be on a minutes restriction.

The New York Knicks and Atlanta Hawks were two of the league’s three most improved teams. In the Eastern Conference in 2021, that takes you to the 4 and 5 seeds.

The Knicks swept the season series, but all three games were close and this may be the most evenly matched first-round series in either conference. 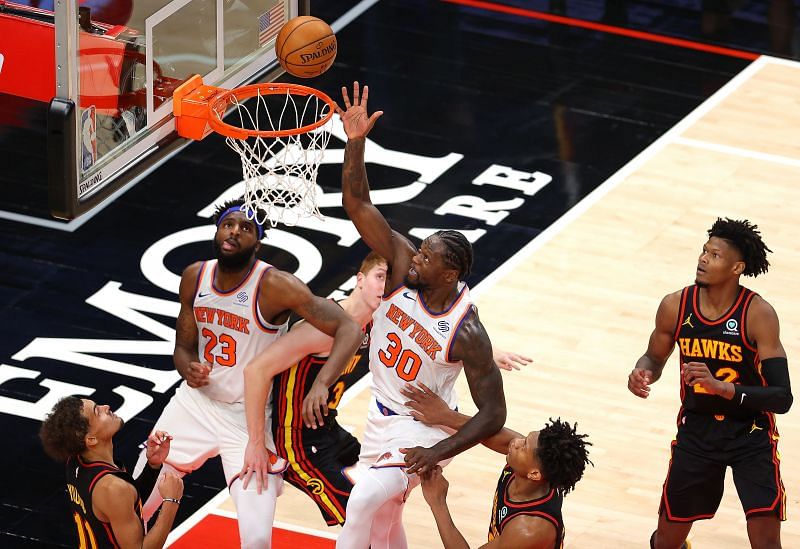