The LA Lakers have been defeated as they commenced to defend their NBA title. Talking Stick Resort Arena was buzzing with fans.

Devin Booker had an outstanding game tonight. He ended with 34 points, 7 rebounds, and 8 assists.

Chris Paul had an injury scare in the 1st half but he made his return after shoulder contusion was not serious.

Game 2 is on Tuesday.

With the lead at 10 with under two minutes to go, it looks like Phoenix is going to win Game 1.

📈 Devin Booker: most points in a playoff debut in Suns history pic.twitter.com/Pq0plRRH5x

LeBron has gone cold from 3 after making three long-range shots earlier in the game.

As you would expect, things are getting a bit more physical down the stretch.

After being knocked to the floor by Wesley Matthews, Chris Paul received a pass and hit a contested fallaway jumper over Kyle Kuzma to extend the Suns’ lead. LAL trail 86-77, with a significant decision coming with 8:31 to play.

Frank Vogel will challenge a 3-point foul called on Kuzma. Kuzma did not leave his feet, as Johnson’s momentum created contact, with Kuzma leaning forward.

After the review, there have been two technical fouls called on the Lakers with Alex Caruso and Montrezl Harrell receiving those penalties. In addition, Suns guard Cam Payne has been ejected from the game.

LeBron misses two of his free-throw attempts but immediately makes it up with a steal leading to an and-one layup.

Cam Payne & Caruso getting into it then Harrell comes in pic.twitter.com/spLJilM9Ft

There is an official review going on following the scrum that broke out after Chris Paul’s foul on LeBron James.

LeBron James gathers a foul from behind the line to shoot 3 free throws.

Anthony Davis attacked the Suns when LAL were without LeBron in a 123-110 May 9 game. He got to the line 17 times, big towards his 42 points. Tonight, PHX has attacked him, and he’s taken only 2 FTA’s in 30 minutes.

Devin Booker pushes the lead up to 16 with a 3.

LeBron to a cutting Caruso, one of the Lakers’ favorite sources of offense.

Nice little DHO drives for Wes Matthews there. That’s been one of the few plays the Lakers have run successfully tonight.

PHX was up 15 moments ago, but the Lakers are back within 7 behind an 8-0 run capped by Schroder getting underneath Ayton for a layup for the 2nd time in the period.

Drummond’s had a nice stretch and is up to 12 points with 9 boards.

KCP just had a chance to cut the deficit to six with a 3. The Lakers are creeping back into this thing thanks to Chris Paul’s injury.

LeBron can still get the points at the free-throw line, but it’s just sort of jarring to see him with head steam not actually finish the layup. This is LeBron we’re talking about here. Seeing him physically compromised is just so unusual.

KCP finally snaps out of his cold streak and hits his first 3 of the night.

Big shot by Chris Paul to put the Suns back up 10. That’s only his fifth point of the game. He needs to prove to the Lakers that he can still score.

LeBron with his third 3 of the night. Half of his shots have come from behind the arc.

Phoenix has clearly been the aggressor. 50-50 balls, transition, turnovers, etc.

It’s really, really notable that the Suns have survived the Anthony Davis at center minutes largely with Dario Saric as the lone big on the floor. If Davis can’t punish Saric, the Lakers are in serious trouble.

KCP has been in a really nice rhyhtm for a while now, but he opens 0 for 5 tonight, including 4 missed 3’s.

Chris Paul has checked back into the game. Naturally, he received a massive ovation from the fans in Phoenix. Glad to see that his injury wasn’t anything serious.

LeBron has gotten Trezl going a bit, his feeds leading to 2 Harrell buckets, plus 2 FT’s.

Make it 3 LeBron assists to Harrell, who has great hands in traffic, and gobbled up a LeBron bullet for an and-1 as LAL get within 4 at 38-34 after Harrell’s FT.

Here's the play where Paul was hurt pic.twitter.com/z2W2pDNdaK

It looks like Cam Johnson hit Chris Paul on that LeBron putback, and that’s what caused whatever’s happening here.

Chris Paul is down. It looks like his arm or shoulder is in pain.

Phoenix has pushed the lead to double-digits, all during the Montrezl Harrell minutes.

The Lakers have played terrible transition defense thus far. That’s another 3 for Phoenix off the break.

LeBron is back in the game and Alex Caruso is joining him.

Davis with the pull-up. The Lakers saw plenty of that in last year’s playoffs.

The first sub is Kuzma for Drummond, moving AD to the 5. The Lakers weren’t very crisp on rotations for Suns 3’s.

The first play out of the T.O. was an alley-oop from KCP to Davis that he hammered home. Nice play from Vogel.

LeBron started 3 for 3 from the field before a miss, all on jumpers, including a pair of 3’s. But Phoenix is 6 for 11 on the other end, getting better looks than LAL typically offer, including 3 for 6 from 3.

All tied at 15 into the first time out.

Back-to-back offensive rebounds for Drummond lead to a putback dunk.

That’s what he’s here to do. But Phoenix takes back the lead with a 3.LeBron takes his first shot of the game. It’s a jumper from the baseline. Swish.

That’s some real nice pick-and-roll defense by Andre Drummond. That’s one of the stories of the series. Chris Paul and Devin Booker are going to hunt him.

The Lakers are really leaning on that Dennis Schroder-Anthony Davis pick-and-roll early. It’s a smart decision if their goal is to preserve LeBron’s energy. Remember, aside from being injured, missing all of those games likely impacted his conditioning. He’s not back up to “I can do everything all game” shape yet.

As usual, the top priority for Frank Vogel on the scouting report starts at the defensive end:

“We got to make them uncomfortable on the defensive end.”

LAL has been very good containing elite guards in these last 2 seasons, and PHX has two of them

Frank Vogel said LAL expects to meet the 85% mark of travel party members that are fully vaccinated by Monday.

Monty Williams said the Suns will have a “Number of guys” defending LeBron and AD. Can’t just have one guy stick to that level of player, typically, especially as LeBron will manipulate matchups/switches throughout the game/series.

Ahead of Game 1, Suns coach, Monty Williams said Phoenix has to have “A great deal of poise … there’s so much that comes with playing the LA Lakers.”

The Los Angeles Lakers punched their ticket to the 2021 NBA Playoffs with a thrilling win over the Golden State Warriors in the Play-In Tournament.

The LA Lakers will now commence their title defense with a first-round matchup with the Phoenix Suns. 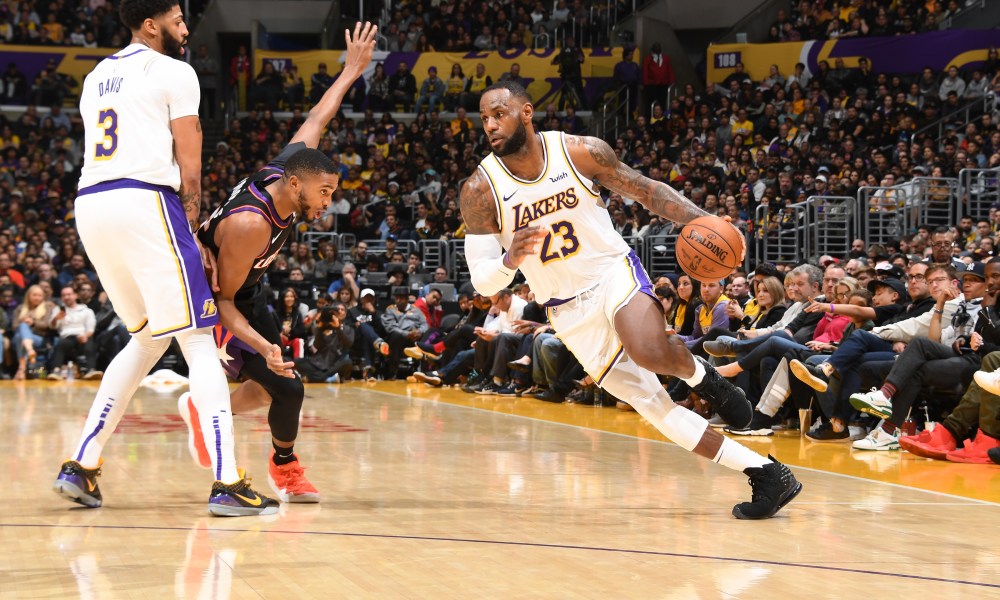