NBA Playoffs 2021: After two seasons that felt like one relentless grind interrupted only by a strange championship celebration, the Los Angeles Lakers simply need a rest.

The 2020 NBA champs weren’t happy to be headed home this weekend after the Phoenix Suns knocked them out of the first round. Yet the early playoff exit came with the consolation of a title memory that’s still fresh in many players’ minds — and an abiding belief they will contend again next year if they just rest up and then stay healthy.

“The one thing that bothers me more than anything is we never really got an opportunity to see our full team at full strength,” LeBron James said. “Either because of injury or COVID or something going on with our ballclub this year, we could never fully get into a rhythm and never really see the full potential of what we could be capable of.”

The NBA Finals will not feature the Lakers, Warriors, Spurs, or Heat for the first time in 23 years. 😳

NBA Playoffs 2021: When these Lakers were healthy, they were outstanding. But that period was brief, and it ended early.

Los Angeles was 21-6 on Valentine’s Day when Anthony Davis went down with an accumulation of leg injuries that would ultimately keep him out for 30 games. 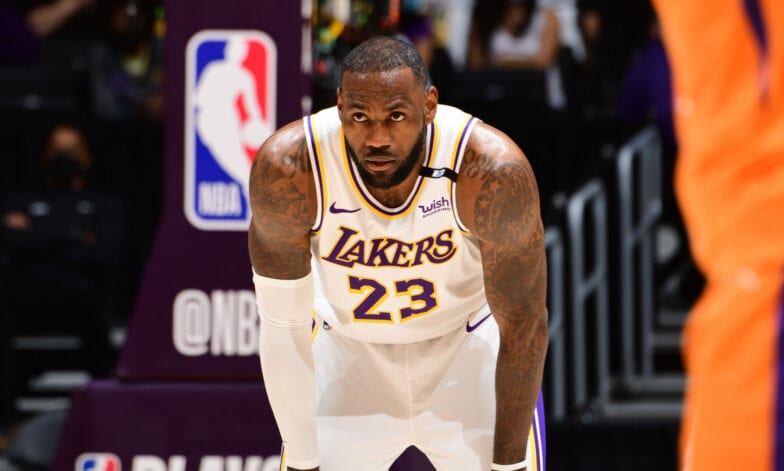 NBA Playoffs 2021: He returned in late April, but wore down again in the postseason and missed nearly all of the last 2 1/2 games against Phoenix with knee and groin problems.

Davis acknowledged the roots of his latest injury-plagued season were planted in the Florida bubble.

“We didn’t get a (full) summer, and it messed up the routines where you’re trying to recover from a season and get ready for a season,” Davis said. “It’s all around the league, but now we have an opportunity as the Lakers to take advantage of this long offseason and get our bodies healed.”

James missed 26 games with a high right ankle sprain, and he acknowledged it wasn’t fully healed even in the playoffs.

Although the 36-year-old star still performed at an MVP level when healthy, time could be creeping up on one of the most resilient players of his generation: two of his three seasons with the Lakers have been significantly limited by injuries.

NBA Playoffs 2021: Defending Champions LA Lakers Knocked out in 1st Round by the Phoenix Suns

NBA Playoffs 2021: The supporting cast also picked up many knocks, from Kentavious Caldwell-Pope’s bruised knee in the postseason to Alex Caruso’s myriad of setbacks. The injuries prevented the Lakers from forming a cohesive unit with the chemistry and teamwork that defined last season’s champions.

Yet from the front office to the end of the bench, these Lakers still think they could have beaten anybody if they had been able to do it together.

“We believe in the group that we have,” Lakers coach Frank Vogel said Friday. “And if we have the core of Anthony Davis and LeBron James healthy, we’ll build the right supporting cast around those guys, and we’ll have a chance to compete for a championship again next year.”