Harden was previously listed as out with his hamstring injury. However, he was later upgraded to doubtful Tuesday morning before eventually being upgraded to questionable.

“We definitely wasn’t planning on not having our guys at this time,” Kevin Durant told reporters. “But, we’re all pros and we have to adapt to any situation. … In the fifth game of a series, it’s just like, ‘All right, let’s go play.’ So, I think we all have that mentality and go forward and hoop.“

Durant struggled with the colossal task of propping up the Nets without Harden and Irving in Game 4, shooting 9-of-25 from the field (1-of-8 on three-pointers), and clearly running out of gas as the Bucks earned a 107-96 victory Sunday.

The Athletic’s Alex Schiffer reported, per the TNT broadcast, that Harden left the arena to get an MRI.

Nets’ James Harden is OUT for remainder of Game 1 vs. Bucks due to right hamstring injury. 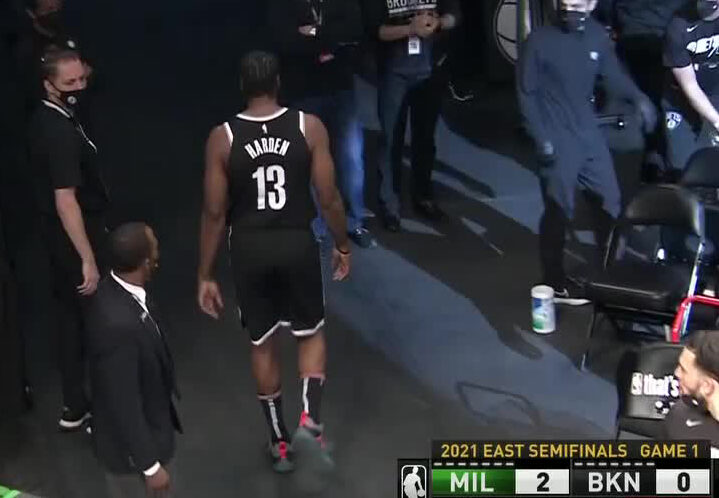 James Harden is also out for Game 5, the team says.

The Nets will have just one of their ‘Big 3’: Kevin Durant. https://t.co/okaops4sOB

It’s an injury Harden has been dealing with this season.

Harden averaged 24.6 points on 46.6 percent shooting, 10.8 assists, and 7.9 rebounds per game for the Houston Rockets and Nets, the latter acquiring the nine-time All-Star on Jan. 13 in a four-team blockbuster deal.

The 2017-18 NBA MVP has dominated for Brooklyn, enabling the team to go 48-24 and finish second in the Eastern Conference.

Harden had missed two games in early April because of his right hamstring. He came back and played against the New York Knicks before dropping out of the game with an exacerbation of his injury.

His hamstring issues began at the end of March when he dealt with tightness in the muscle, but he only missed two games originally. He lasted four minutes in his return on April 5 and was sidelined, but on April 20 it was announced he would be out indefinitely.