LeBron’s back in alongside AD, Harrell, Kuzma, and THT here with 5:30 to play.

Shows you something about how hard they are to beat when he’s extra aggressive.

LAL’s starters were effective in both stints, while the bench had a subpar stretch as LAL take a 64-56 lead into the half.

This LAL 2nd group isn’t likely to be seen much in a game that matters for defensive reasons.

LAL is holding Alex Caruso – a huge defensive key to this lineup – out today. He would replace either McLemore or THT. And Gasol could replace Harrell in certain matchups.

No look necessary for the dime to Trezz 💯

Indiana gives up the most points in the paint in the NBA, and Frank Vogel has deployed Montrezl Harrell against their second unit, for 6 points at the rim already in his 6 minutes on 3 of 3 FG’s.

LeBron looked good early in his return, with 4 points and 5 assists in his 7 minutes, and then AD dominated the final 5 minutes of the quarter, scoring 13 of his 17 points, his most in the 1st Q this season.

With LeBron getting his first rest, AD has gotten more aggressive, and just scored twice in the paint to put LAL up 25-17. Davis has 8 point with 3 boards early.

LBJ got up pretty high for that Hammer as Schroder tossed the oop backward in transition for a streaking LeBron.

Perhaps some overpassing early in this the 2nd game the LAL starting lineup has played together as they search for a rhythm. They’ve had plenty of wide-open shots.

LeBron’s already found both Drummond and AD for alley-oops as LAL lead 10-9.

LeBron’s been active early, already with an offensive rebound, a near-miss on a lefty layup, and a made step-back jumper as the Lakers scratch first at Indiana.

While the Lakers are healthy all of a sudden, today’s opponent, Indiana, is not.

Pacers are without Sabonis, Aaron Holiday, Turner, Brogdon, Sumner and Lamb (and Warren, who’s been out since January). Caris LeVert was a game-time decision, and he will start.

Vogel on Dennis Schroder’s ability to get back on the floor so quickly after a two-week absence for health & safety protocols. “I think his readjustment curve is going to be on the lesser end of some of the other cases we’ve seen around the league.”

As expected, Anthony Davis will also play today. He missed the last game with a sore adductor, but Vogel said they held him out of the Houston game more due to it being the 2nd night of a back-to-back. He’s good to go.

LeBron won’t have a minutes restriction today, but they’ll simply “be responsible.” They also haven’t decided if he’ll play in the regular-season finale tomorrow (at NOP).

Alex Caruso will probably be available, but Vogel may hold him out to get him some extra time with the foot.

LeBron James will return to the court today at Indiana.

Pacers coach Nate Bjorkgren said Caris Levert and Domantis Sabonis will go through warm-ups and their status for IND vs. LAL will be determined afterward.

LeVert missed the last game with a sore knee and Sabonis left early with a quad issue. Malcolm Brogdon remains out. 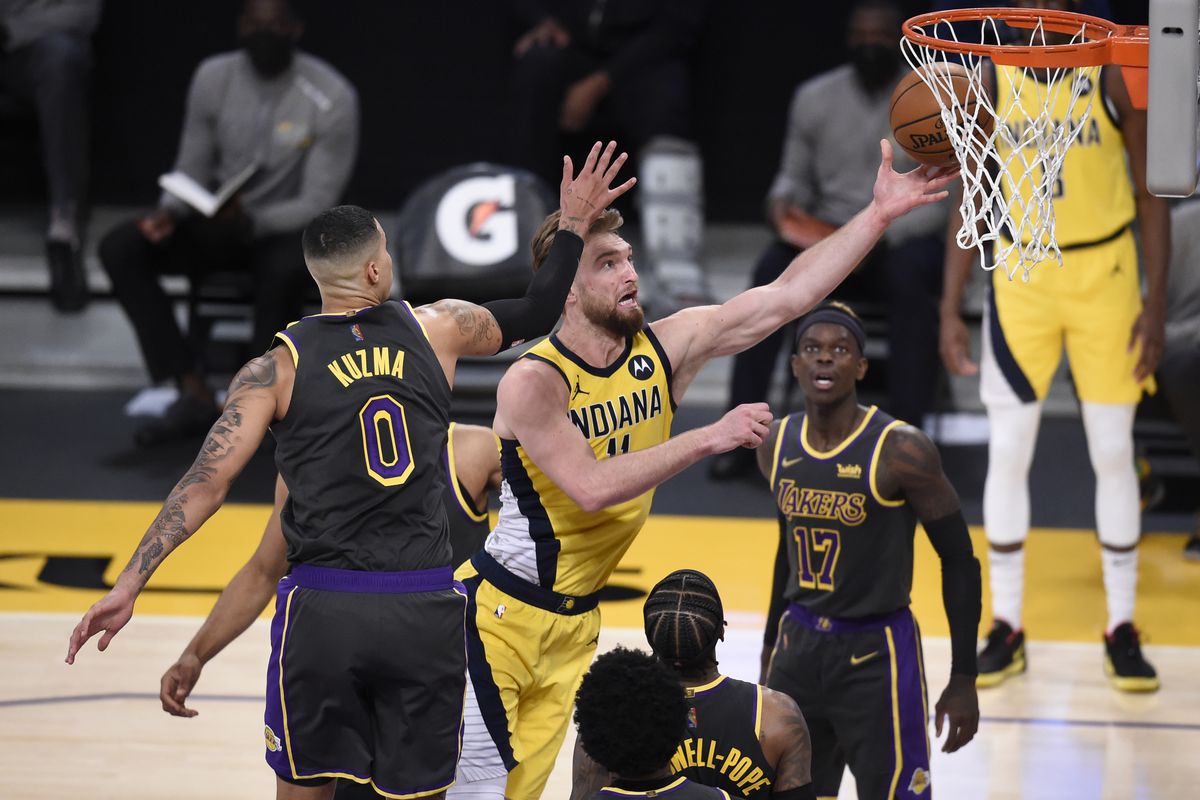