Tottenham came from 1 goal down to win the game with a last-minute penalty. They made 3 changes as they switched from a 3-4-2-1 to a 4-3-3. Harry Kane was ruled out due to injury. Rodon and Sissoko also dropped out as Lo Celo, Bale, and Lucas came in.

Southampton made 4 changes as Bertrand, Diallo, Djenepo, and Redmond are all replaced by Salisu, Tella, Walcott, and Adams.

Got Spurs back in the game with a moment of class. 🏴󠁧󠁢󠁷󠁬󠁳󠁿 pic.twitter.com/SXFrVPkSU1

Around 100 unhappy supporters assembled at the arena to voice their disapproval at Spurs’ association in the collapsed European Super League breakaway plan and it added to a tumultuous 72 hours at the club.

Spurs overcame a slow start to come from behind and claim an important win that keeps hopes of Champions League qualification alive.

Danny Ings put Saints ahead in the first half. James Ward-Prowse whipped an inviting corner towards the near post where Danny Ings was on hand to power his header in the far post in the 30th minute to give the Saints the lead.

Son slipped a clever into Lucas whose shot was blocked by Vestergaard. Unfortunately for him, the ball fell to Gareth Bale who curled n accurate finish from 8 yards out into the far corner in the 60th minute 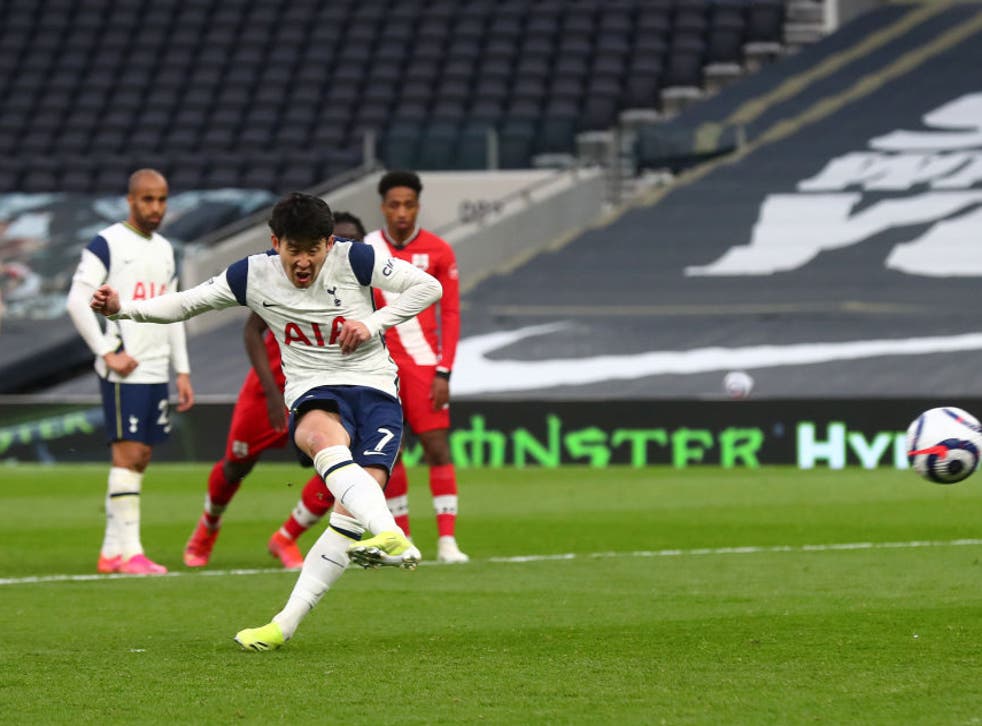 Tottenham vs Southampton: Son wins it for Tottenham

Djenepo made a late challenge on Reguilon in the 87th minute right on the edge of the box. Initially, the referee gave a free-kick but then VAR intervened to check for a penalty and gave the final decision.

Son made no mistake to win the game for Tottenham in the 90th minute by placing his shot in the right corner and sending McCarthy the wrong way.

Asked what he thought of the fans’ protests, Mason, who is a boyhood Spurs supporter, said: “First of all I can’t have an opinion because I wasn’t aware of that, we didn’t see it from the coach so I can’t comment on that.

“But the most important thing is to create good energy around the place. Obviously when you are winning matches that does help, but more importantly the performance in the second half is where we want it to be.

In Mason’s defense, he has been otherwise occupied over the last couple of days as he made the jump from academy coach to interim head coach and used that as an excuse to sidestep the issue.

“I’ll be honest, I said this all along, I really can’t have an opinion on it, because last 48 hours, I’m sure you can respect the fact that my mind, my energy has been fully involved in this game, in preparing for this game,” he said.

ISL 2021:Belief, confidence in our abilities have taken an upswing after Champions League- Brandon Fernandes