Phoenix has pushed the lead to 20. This seriously turned into a Suns blowout.

Phoenix might seriously turn a double-digit third-quarter deficit into a 20-point victory.

At a certain point, you have to wonder if Denver should get Nikola Jokic off of the floor. He’s played a huge minutes load this postseason and it looks like it took its toll on him tonight.

This game has been blown wide open. Phoenix leads 94-79. Denver’s offense has fallen off of a cliff.

Everything is going right for Phoenix right now. There is no way that shot should’ve gone in.

Denver can’t stop Phoenix right now. Not even close. Every time they trim the deficit slightly, Phoenix turns right back around and matches them.

And the Suns have reclaimed the lead by one on that gorgeous and one layup by DeAndre Ayton. Denver, meanwhile, hasn’t scored in over four minutes.

Jae Crowder, who starts 1-of-6 from 3, just made the hardest one of the night. He got fouled and ended up on the ground but still drills it, as is Jae Crowder fashion.

The Denver lead is up to 10 after that Austin Rivers 3. It’s hard to say that Phoenix’s offense is stagnating considering their raw point total, but Denver has had some success in the second half defensively.

Aaron Gordon’s athleticism and Austin Rivers’ physicality have posed problems for the Suns over the past few minutes.

Jae Crowder just got away with a really blatant and unnecessary shove on Nikola Jokic.

Campazzo again! One of the smallest players in the NBA has been absolutely huge tonight, giving the Nuggets 11 points, four rebounds, two assists, and a steal.

Very smart point by Reggie Miller there. Nikola Jokic doesn’t bring the ball down low. That might not sound important, but it is, especially against a Chris Paul team. For years, Paul has specialized in bothering bigger players because he knows when the ball comes down low, not only can he strip the ball.

Devin Booker very nearly gave the Suns the lead, but his foot was on the line, so the Suns will have to settle for a 46-46 tie.

Another look at that DA dunk 😈 pic.twitter.com/Ar6oGw4xC8

Torrey Craig revenge game! He just nailed a 3 to cut Denver’s lead to two. Craig spent the past few years with Denver before leaving the last offseason.

That move by Facundo Campazzo is something maybe half a dozen players in the NBA could do in a playoff game. You need to be small enough, quick enough and skilled enough to do that in traffic.

And there are Chris Paul’s first points, and sure enough, they come from behind the arc. I guess his shoulder is doing better than we thought. Some of his incredible passes thus far would support that assessment.

Devin Booker looks like he’s dealing with some pain, but is playing through it.

Phoenix’s depth is showing up early here. That Bridges corner 3 is emblematic of the issues Denver is gonna have in this series.

The Suns just have so much. They have so many players that can give the Nuggets issues. The Nuggets are really heavily reliant on Nikola Jokic and Michael Porter Jr. to generate almost everything for them.

Denver leads 18-13 as we cut to our first timeout of the game thus far. It’s been all offense as we anticipated thus far.

Chris Paul is already hunting Michael Porter Jr. in pick-and-roll, but he’s struggling to generate much space. Porter is no stopper, but he’s grown significantly on defense since Donovan Mitchell did that to him last season.

Denver hasn’t been at all afraid of letting Jae Crowder’s man, Aaron Gordon, sag off of him to help against Devin Booker thus far.

We’re less than three minutes into this game, and we’ve already seen highlight dunks from DeAndre Ayton and Jae Crowder and a self alley-oop from Nikola Jokic. If you expected fireworks in this matchup, you have not been disappointed.

Denver is in total control thus far. Campazzo is going to the line for the and-one up 7-2.

Jokic just passed it to himself off of the backboard! Wow! Sadly he doesn’t get the assist for that.

Chris Paul just pulled the chair on Aaron Gordon. A very, very smart veteran move by him. He lets Gordon think he’s backing him down before letting him fall. 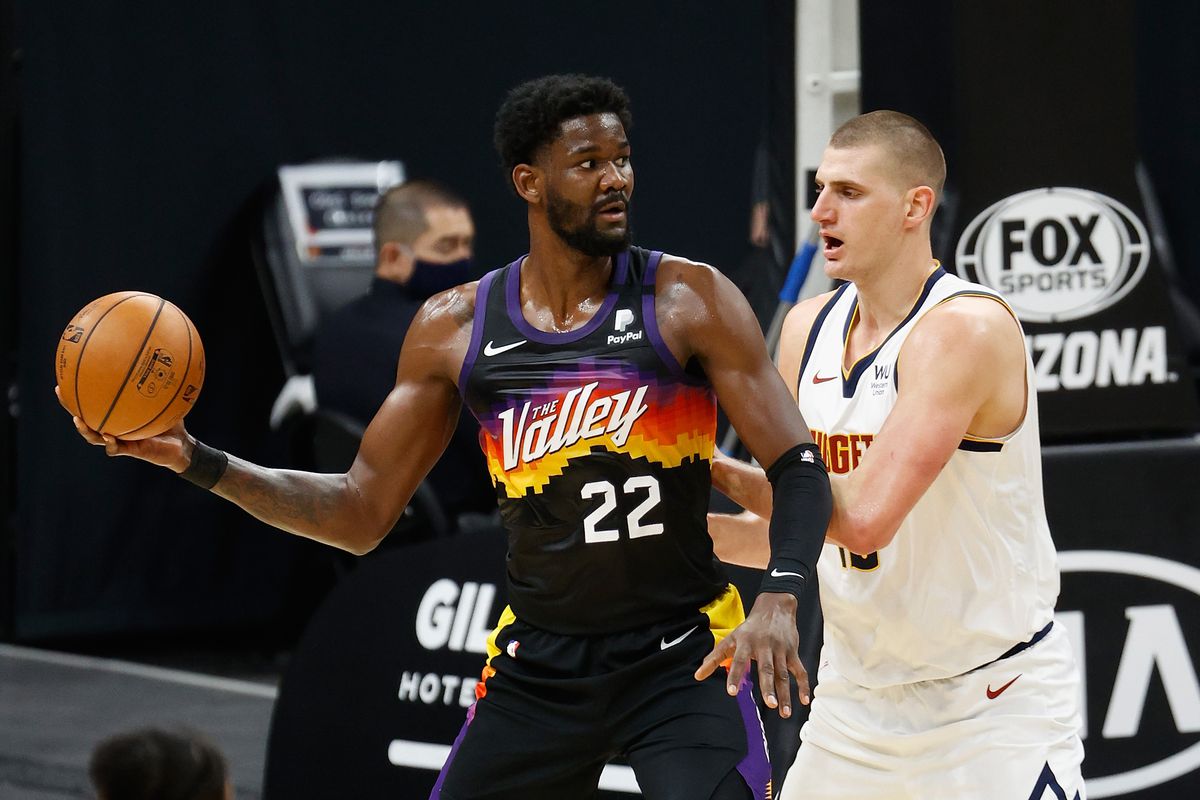