Tokyo Olympics: On a U.S. basketball team filled with stars, nobody scored more than Bradley Beal during the season. He is out from the Olympics games.

The coronavirus has wrecked his Olympic dreams.

Beal will miss the Olympics after being placed into health and safety protocols and USA Basketball said Thursday it will replace him on its roster at a later date.

“I’m dying for him,” coach Gregg Popovich said. “We all are.”

Wizards star Bradley Beal has entered health and safety protocols at Team USA camp, placing his return to play status up in the air, sources tell me and @joevardon.

USA Basketball could still replace Beal before heading to Tokyo. The Americans picked their 12-man team last month but noted that it may change if necessary.

Players, and their family members, in Las Vegas, have been tested daily during their training camp there. Many have a family with them now since those loved ones will not be allowed to travel to Tokyo for the Olympics because of virus-related restrictions there.

Mask-wearing has been required and many of the same rules and policies that players had to adhere to during the NBA season has carried over to the U.S. camp. 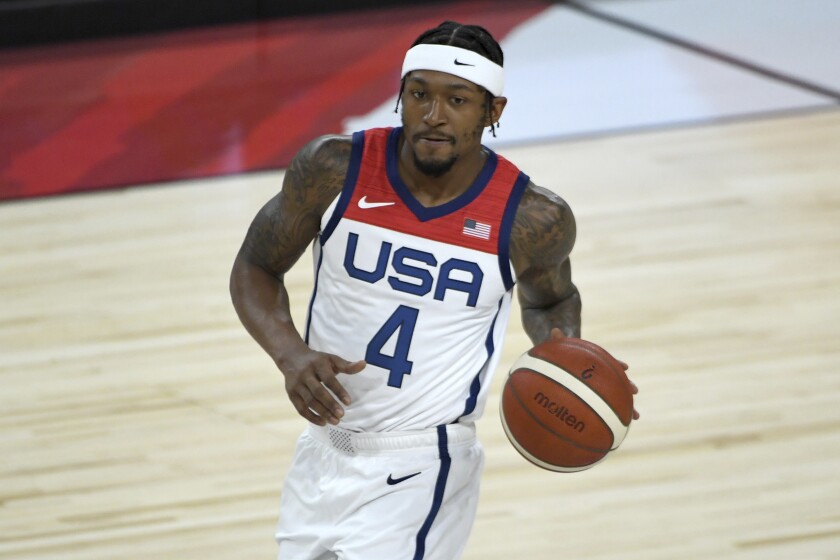 This would be Beal’s first time as an Olympian if he makes it to Tokyo. The U.S. doesn’t play a game in the Olympics until July 25 against France.

“It was easy decision for me,” Beal said after Monday’s win, appearing at a press conference without a mask — but walking into the room with one on, and placing it back on before getting up to exit the room. “I’ve always wanted to be a part of the Olympic team and be on this stage and have the opportunity to represent my country.

“Ultimately, you know, this is fun,” Beal added. “This is something you want to be a part of and you realize not every player has that opportunity or blessing to play on this team. For me, it was a no-brainer.”